Apache Recon: Because of the Brave Michael L. Moomey 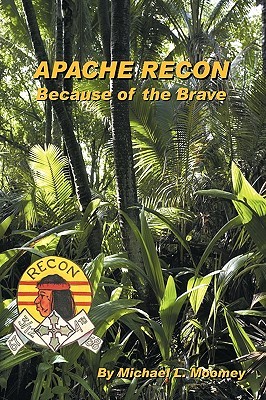 Based on a true story The story starts out while in a line company in the Central Highlands of Vietnam where he was a standout machine-gunner, getting the praise and slaps on the back he so cherished- by killing the enemy and keeping his fellow soldiers in a safe zone by not allowing the enemy to be the aggressor when he could, and the few times the enemy did a full scale assault on their position he would again take control of his area allowing his fellow soldiers to get involved in the fight, while staying alive.

He was recruited to join the Reconnaissance Platoon where he and four others went out on 3 to 5 day and night missions, looking for an enemy that was looking for them. Most of the time they were able to move through the thick jungle without being detected, but not each mission ended that way. There were times they had to fight their way out of a bad situation- sometimes using their support (mortars, artillery, and bombers), you had to know what you were doing when you called in, a 20 meter mistake could end up killing yourself. Going out on a mission with little time left wasnt his idea of anything smart- but it still was his job to go.

The 40th reinforced Artillery Regiment surrounded them- they thought it was all over for them. They had them surrounded and were crawling their way up to where they were. Lt. Hadley was among those that came to relieve us and 30 minutes after we were back safe at the firebase the enemy began firing rockets into those that came to save us.

In a short time, 15 young men including Lt Hadley were slain.

Comments
Comments for "Apache Recon: Because of the Brave":